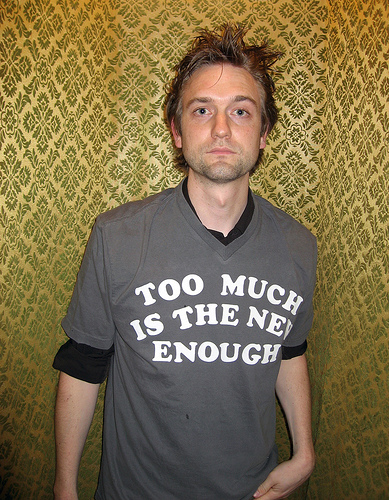 Stephen Coles describes himself, with a concision and efficiency not likely to surprise his followers, as a “writer and typographer.” For the designers (and friends of good design) who have followed his prodigious contributions to the field, however, he is also an impeccable curator, a tireless educator, and an ever enthusiastic advocate for inspired, well-executed work. Whether engaging with people grappling with the complexities of typography for the first time on Quora, posting about a curious detail or quizzical aspect of something he’s come across during his travels on his blog, or adding his compelling take on a new object or typeface via one of his core projects – Typographica, Fonts in Use, or The Mid-Century Modernist – Stephen communicates his passion for the things which surround us with eloquence and empathy. Currently spending his time between Oakland and Berlin, Stephen is also a regular contributor to Print and Codex magazines, a Type Camp instructor, and a member of the FontFont TypeBoard. We’re really happy he took the time to answer our questions, and highly recommend taking a look through his Listgeeks lists after you’ve had a chance to read his responses.

Derick Rhodes/Listgeeks: Earlier this year, Mashable published an article highlighting, “8 Essential Web Typography Resources,” four of which were either created by you, or involve you in some significant way. What keeps you inspired to remain engaged (especially via so many different projects) with all things typography-related?

Stephen Coles: I think I have an unhealthy desire to correct all the typographic inaccuracies that plague the internet and hopefully that translates into something useful now and then.

LG: How did your initial interest in typography and design come about?

SC: It was when I met my first Mac. It was the ability to choose and use fonts that opened my mind to the world of typography, much in the same way that this new widespread power has introduced type to the mainstream. I explored this in a practical context when I worked as a paginator at my college newspaper, fussing over the typographic details of a daily rag rather then attending classes.

LG: The emergence of web fonts (and related licensing models) has had a significant impact on the role of type in designing for the web. What’s your take on the successes and limitations of this newish way of working with type online?

SC: It’s an exciting time for typography on the web. Everything everything changed with the intro of digital DTP and now it’s like 1985 all over again. New technology, new ways to use type, and new fonts made specifically for a new medium. We’re still in early days but now that there is a standard format and successful webfont services we’re over a significant technical hump. Now it’s just a matter of making quality screen fonts and using them in interesting ways on the web and in mobile devices.

LG: What are some of your favorite examples of type used exceptionally well online?

I’ve written about most of my favorites at Fonts In Use, where you can narrow the content to just the web stuff. Beyond those, one of the best is one of the first: Jax Vineyards, who used FF DIN for their identity, echoing the modern design of their wine labels. This entire site is built with web fonts.

The companion site for the new book Explorations in Typography demonstrates what’s possible with type on the web. Using the tools in the sidebar you can play with layout, font selection, and type treatments using text from the book itself. When you need to explain the benefit of custom type or webfonts to someone who doesn’t get it, show them The New Yorker.

LG: Excluding the web font phenomenon, what do you feel has been the most exciting development related to designing for the web in the last year or two?

SC: The speed at which web designers have taken to the importance and craft of typography. A few short years ago something as simple as typeface selection wasn’t even something they had to deal with, and now, despite my own fears, there is already a widespread respect and enthusiasm for doing type right.

LG: You’re currently dividing your time between Berlin and Oakland – is travel important to shaping your perception of the role of design and typography when it comes to your projects?

SC: Definitely! Every place has a typographic dialect just as it does with speech. And besides being simply interesting, it can sometimes teach us all a thing or two. Americans can learn from the British, for example, to stop being silly with always stuffing their quotes inside punctuation. The “developed” world of the West can learn from India and Latin America that hand painted signs are almost always more interesting than plastic, backlit boxes with vinyl type.

LG: Finally, I asked this question of Erik Spiekermann in a Listgeeks feature a few months back, and I’m curious to your take: Do you feel that design, as an increasingly web-oriented activity, is in danger of becoming too uniform, internationally? In other words, is our visual sensibility merging at the expense of more local (or regional) innovation/variation that may have been prized in the past?

SC: That’s a tough question. I hope not. But I think Erik answered it perfectly.

Stewf tumblr
Typographica
Fonts in Use
The Mid-Century Modernist