Editors formed in Birmingham, England, in 2002, and have seen their profile increase dramatically with each of their three successive album releases.  Their most recent album, “In This Light and on This Evening,” (2009) topped the UK album chart (as did its predecessor, “An End Has A Start”), even as the band transformed its sound from layered, guitar-driven indie rock to a more synth-based/industrial sound.  Listgeeks caught up with the band’s principle listgeek, bassist Russell Leetch, as the band head back into the studio with Mark “Flood” Ellis to start working on the material for their fourth album.  After you check out the below interview, be sure to have a look at Russell’s lists: Favourite 80s Bands, Favourite 90s Bands, and Favourite Meals of 2010. 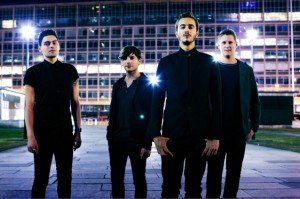 Listgeeks: Sonically, it seems like the band made a pretty big transition from “An End Has a Start” to “In This Light and on This Evening.” Is a similar kind of revisiting the sound of the band happening with the fourth album?

Russell Leetch: Whenever listening back to our previous albums there are always annoyances or things that we may have not liked or wanted to have improved on. It is only with hindsight that you can look at these and move forward. Once we have completed a record we usually tour for an extensive period of time and the songs change again . . . so it is after this period when we start thinking of making a new record that suggestions of who we are going to use and what we may want it to sound like come into play. When we were making “An End Has A Start” we were going for a more polished, fuller sound, which we achieved but maybe pushed a bit too far for a second record. With the third we really wanted to move away from having 30 guitar tracks on a song and for people to hear the band playing in a room again. With the latest record we are rehearsing the songs so they are ready to record when we go into the studio. Studio time can be expensive and it is usually best to have the songs fully rehearsed and ready to go before getting into the studio and changing them in there. At the moment  things are sounding heavier than ever. When the band plays in a room there is always a dynamic to having strong individual parts and usually at volume – this is really prominent at the moment. We are pushing all elements that Editors consist of and that’s the best way of making a record.

LG: Has working with Flood (Depeche Mode, U2, The Jesus and Mary Chain, Nine Inch Nails), both on the current project and the third album, pushed the band to develop new ways of incorporating synthetic sounds or different types of technology into the making of the music?

RL: Absolutely. Flood is well known for his work with bands incorporating synthesizers, and is very good at triggering the mode of a song by using a synth to create a rhythmical force or something as a drone for building a song around. When we made the first record it was a straight forward “rock” set up – guitars, bass drums and a micro korg! Now we use Logic running a variety of different things, whether it’s a drum pattern to free up Ed or having a synth keep the chords. We all have individual keyboard set ups and Ed tends to play the majority of his parts using an electronic kit – this really can shape the songs in different directions, especially when rehearsing. Modern bands have so many opportunities now to create such great music for not many pennies!

LG: Do you think an awareness of your audience plays a role in how you approach making albums? When you’re working on new material, is there a sense of what might work better sonically in larger venues and festival environments? 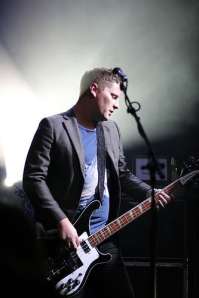 LG: Finally, the bass plays a prominent role in the sound of Editors, with songs often reliant on what you do with the bass as a melodic force.  Is it difficult to know when to bring a more melodic/upfront approach to your playing on a track, rather than approaching things in a slightly more traditional/supportive way? Does it just sort of come intuitively? Peter Hook (former New Order) and Carlos D (former Interpol) both come to mind as players who have also straddled this divide with style in the past . . . whose work do you admire when it comes to the bass guitar these days?

RL: I think myself and Chris take turns in supplying extra melodies to a lot of our songs. Prior to the start of the band I wasn’t a bass player and more of a piano player/guitarist. I think this has often led to there being more melody rather than root notes and basic rhythm from the bass guitar. Bass can play such a vital part to some songs without people even noticing it, and it’s taken me ages to realize this. I really enjoy Hooky’s bass playing – he really carries a lot of Joy Division’s work.  Pretty much all the riffs come from him and I like that. I have always liked Carlos from Interpol as there are lots of intricacies in his playing – more than I would ever play but I do admire how strong personalities approach their instruments, it’s what makes great bands. My favorite contemporary rhythm sections are Radiohead, The National and Elbow.