Listgeeks co-founder Derick Rhodes is a man of many projects and interests. While his professional life is currently divided between Listgeeks and fStop (the Berlin-based image library he works on with Listgeeks collaborator Max Zerrahn), he is also an avid photographer, songwriter, and – as of earlier this year – filmmaker (more on that below). When he’s not busy making lists (752 to date, whoa!) Derick enjoys strolling around NYC and hanging out with his daughters.  Check out the below interview for more on how and why Listgeeks came to be – and to learn about some of Derick’s influences and current obsessions:

LG: How did the initial idea for Listgeeks come about?

Derick Rhodes: Max and I have have been friends for a long time, and on many occasions our shared love of lists has been a topic. While it’s easy to find out what your friends are listening to, or maybe which movies they’ve found interesting lately, we thought it would also be cool if there were a way to share a wider range of interests, so that people could explore the inspirations and interests of others across a variety of categories.

LG: What have been some of your favorite lists since you launched the Website?

DR: As Max mentioned in his interview, we’ve been surprised by the ways in which people use lists not just to catalog the things they like, but to communicate something about who they are. In this fantastic interview with Spiegel, the novelist Umberto Eco argues that the list “is the origin of culture,” and I think it’s true that there’s a very fundamental satisfaction in arranging things (from feelings to least favorite sports teams) in list form. Lists give life order and help us to more easily process the world. Here are some favorites:

Morrissey Vs. Technology by Derick
Artists in Love by ollygolightly
A current to do list copied and pasted from my phone by Girls
Best ways to hide you’re a tourist by limboyouth
Hip Hop Tracks that Won’t Happen by wired

LG: How can you imagine Listgeeks changing/expanding in the future? 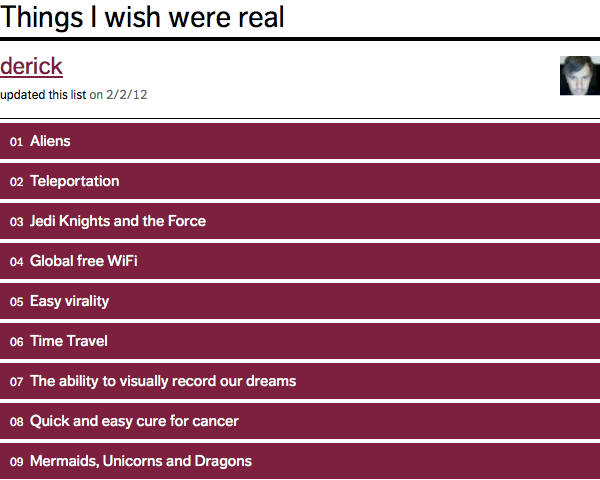 DR: We sent a message out to the Listgeeks community a few months back, trying to see who might be interested in partnering with us to evolve the site/project, and the feedback has been really interesting. We’re currently in discussion with a few different potential partners, and we hope to have an announcement of one sort or another in the coming weeks. From my perspective, the priorities in further developing the site are pretty simple:

LG: Are you a big user of social media apart from Listgeeks?

DR: I (mostly grudgingly) use Facebook daily, and I’m relatively active on Twitter, but I prefer Listgeeks.

LG: Tell us about the movie you made – how did that come about?

DR: It’s called Secret Everything, and I shot it with some friends last year in Brooklyn (where I live) and Vermont. It was a low budget affair – I’ve been obsessed with filmmaking since I was a teenager and decided to write something that could be produced relatively quickly (the shoot lasted 8 days) with a minimal crew. Film Threat published the first review a few days ago, and now I’m waiting to hear back from a bunch of different festivals – fingers crossed it will be released on the major digital platforms (Netflix, iTunes) later this year, but if not I’ll find a way to make it available.

LG: What are some of your  favorite Websites at the moment, apart from Listgeeks?